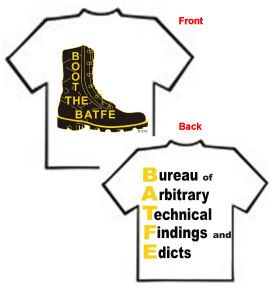 I have been overlooking the cases that the NRA Civil Rights Defense Fund has taken on or assisted in. Then take a look at the Gun Owners Foundation and the cases that they have assisted in. Not surprising is that a majority of the cases are dealing with the ATF and how the ATF has trampled on the rights of citizens. This is a very dysfunctional agency, that is far beyond repair with problems on the inside as well. Or the waste or tax dollars, it was on the day of our appeal that former ATF Director Carl Truscott resigned for alleged mismanagement and misconduct, the OIG Report is a must read. A look at it's disregard for the Second Amendment and the mentality towards firearms is tell-tale sign:

“If it wasn’t for criminals, there wouldn’t be a gun industry in this country.” Gerard Nunziato (former BATFE official)

“Also troubling is the NRA’s attempt to protect the gun industry from lawsuits that could help shut down gun dealers.” Ron Schuman (former BATFE official)

So is the ATF so far gone after reading the post on Of Arms and the Law, which an ATF official states: "Perhaps the problems are too significant to place on the shoulders of 3 men, or maybe the Bureau is beyond repair. Either way, the complaints continue as does the retaliation, abuse of authority and the climbing number of EEOC, OSC, OIG and internal grievance complaints."

When a Federal Agency resorts to destroying the Constitution to justify their own existence then it is time to shut it down.